On Monday, Jan 30th (Ryan’s champagne birthday!), we packed up our belongings, handed over the keys to our apartment, said goodbye to the cat, and officially christened the beginning of our adventures with the requisite bottle (champagne!) over our two travel packs. We can’t think of a better way to celebrate a big year like that this than taking that time for travel, learning, and self-reflection. 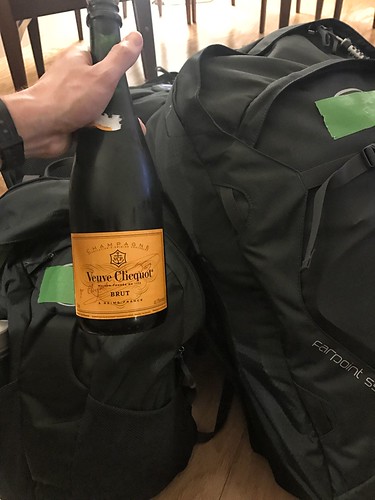 For the folks wondering what it is like to fit two lives into 55L bags – have patience, we’ll get there eventually. We’re still getting our sea legs underneath us, and while we spent an inordinate amount of time fretting on each piece of gear, we’re finding it’s the little things that make all the difference.

We boarded our flight a few minutes after midnight, flying 16 hours to Hong Kong, followed by a 4 hour jaunt to Singapore, finally landing in Bangkok after 26 hours of continuous travel. We both actually managed to sleep a fair amount, even after jostling about due to crazy turbulence over the Pacific. After a continuous stream of airplane meals (we got 4 total), our stomachs lurched onto the runway in Bangkok. The shock of warm, humid air after more than a day in cold pressurized tubes was a shock to the senses. Neither of us was well dressed for a tropical climate and being dumped into a cosmopolitan city like Bangkok with greasy airplane hair, no shower, and what felt like 100lb packs was a little rough. But! We made it to our hotel after a bit of a transit + taxi scramble, got some much needed showers, and started settling into the next year of our lives. 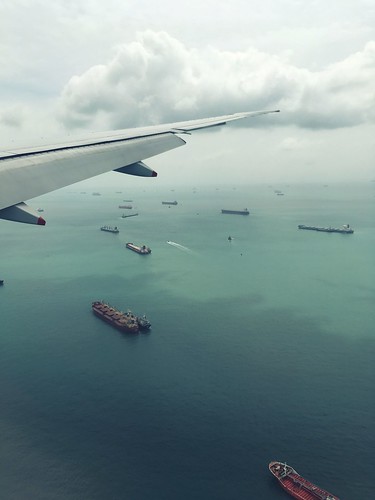 In Bangkok, the first order of business was getting our necessary travel immunizations. After looking up the costs stateside and seeing an episode of 30 Days with Morgan Spurlock, we decided to try our hand at medical tourism. The next morning we checked into Bumrungrad International Hospital, a huge, modern hospital that’s popular with medical tourists, expats, and Thai elite. It’s the most beautiful hospital we’ve ever seen, with a hotel-like feel, complete with koi pond and breezeways that house sand gardens on every floor. The bet paid off – not only did we get first-in-class service, we each paid less than a third of what it would have cost us in the US. Getting our arms blasted with vaccines wasn’t particularly easy, though, the next night Camille was up all night with a low fever and cramps as her body went through a massive immune response. However we’re no longer scared of getting Japanese Encephalitis when walking through rice paddies and pig farms, so 100% worth it! 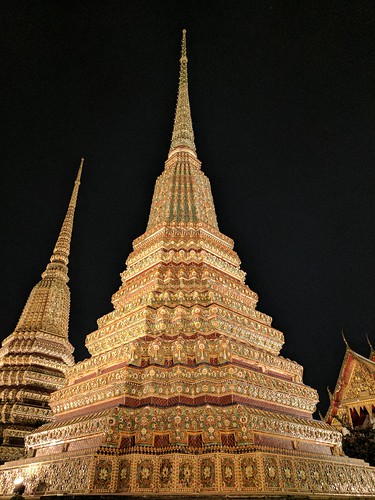 The beautiful Wat Pho, a temple to a past king decorated with flowers of porcelain mosaic, at night

Bangkok was fun, it was a nice place to start our journey – the comforts of the big city makes the shock of a new culture easier to stomach. All the things we was warned about were true – for example, there are no traffic laws. Crossing the street is a challenge – if there’s a local person also attempting to cross the street, you stick to them like glue, when they go, you go, when they stop, you stop. Life is lived outside – you eat outside, you shop outside. We spent most of our time walking and taking the BTS (the Sky Train) to and from a bazillion open air markets – evening street food markets, huge weekend markets that sell everything you could imagine, floating markets where you pick up your greens and groceries from a woman who brought them over by boat, commercial flower markets that the hotels buy from. One day we walked over 13 miles eating our way through the city. There was also a lot of time negotiating street food – “oh that looks good – wait, I don’t want chicken livers right now. Perhaps later.” We ate well. In the morning Ryan would run outside and grab some fried chicken, soup, and rice from the street carts nearby and we’d eat from little plastic bags on the hotel roof. All of the food we ate though, regardless of whether it was from a push cart or in a restaurant was face meltingly spicy, and consistently delicious. 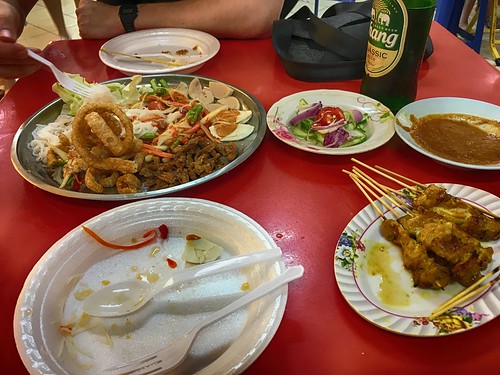 Satay and Som Tom 'Jungle Style', aka, with everything, from a street food market

Not satisfied with our own investigations, we booked a Midnight Tuk Tuk Food Tour through Bangkok Food Tours, which was easily a highlight of the week. Guided by Tony, hilarious and kind, we careened through the busy streets of Bangkok by Tuk Tuk at blazing speed, sampling the best pad thai in Bangkok, getting a privileged view of Wat Pho at night after it was closed to other tourists, and generally stuffing our faces until we were sick to our stomachs. 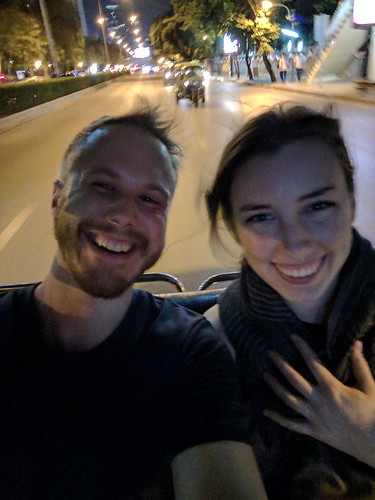 Flying through town in a tuk tuk

Bangkok was also very weird, and unsettling at times. Sex tourism is real, and we didn’t have to leave our street to find it. We stayed in a hotel apartment, typically rented for long stays, and the other guests seemed primarily to be older German men there to spend time with Thai women. When we Googled “sex tourism thailand” the first result (not going to link to it to increase its Google rank) was not a Wikipedia article with facts and figures, but an excruciatingly detailed guide to planning your sex tourism trip. Now we know that the neighborhood we stayed in (Sukhumvit 8) is a pretty popular destination for these sort of trips. That’s not to say it was particularly overt or creepy to stay there – there are blocks in Downtown Oakland where the sex trade is significantly more obvious, but after a couple of days we were ready to see fewer elderly men escorted by high heeled girls and ladyboys. 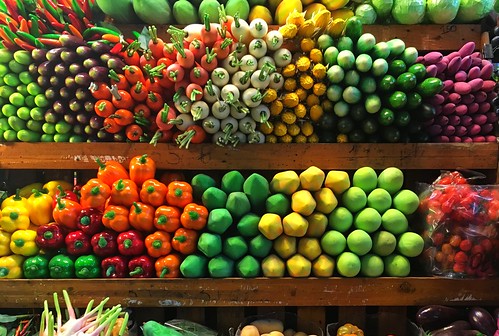 When we were sitting at home on the living room floor putting the last items in our backpacks (we had a ‘bring’ bin and a ‘leaving’ bin, and items kept moving in between backpacks and each bin as we struggled to imagine what we would need for a year without an apartment, furniture, dish sets, and full size shampoo bottles) we didn’t really know what we were getting into, I’m not sure we knew those first few days in Bangkok either. We were trying to find a balance between tourism and traveling, planning and winging it, expense and frugality. We still are, but as we sit now on beach in Mui Ne, Vietnam, we think we’re figuring it out. 🏖

Next up – our time in Cambodia, a crazy country rediscovering itself and its place in the world after intense trauma.

Also, we’re updating instagram as often as we have cell service or wifi! hang out with us there! – @theretoday @ryanorban @theaceae 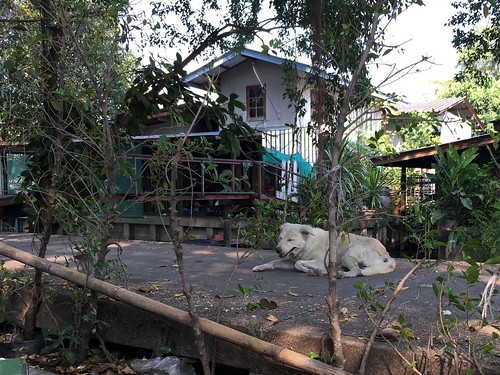 puppy on the canal